I went on a business trip last week with my boss. In all the years that I have worked at this job, I’ve never gone on a business trip. I just kept getting pregnant and/or having babies. But now that Liat is one year and I am not preoccupied with getting pregnant again, I was glad to go. Just one day away from the office responsibilities and the house responsibilities was a welcome change.

It also gave me the opportunity to chat a bit with my boss. Although I try not to discuss this blog at work, my co-workers know about it, as do my bosses. In fact, I would not be completely shocked if they sat around reading it. Mildly shocked, maybe. But completely? No.  Hell, I wonder if his ears are turning red as he reads. these. words. right. now.

The boss I traveled with has never talked to me about the twins. Never really acknowledged it to my face. That’s fine. When I first returned to work 3 weeks after they died, I actually asked a co-worker to ask everyone not to make a big deal of it. But now, two years later, in the airport, waiting for our return flight, after a very abstract segue into the topic,  he said to me “It seems like you carry a  lot of anger about that situation.”

Ok. I guess we can have this conversation. And I guess you’re reading my blog.

“Why? It’s not like it defines who you are. Why would you want to focus on that instead of focussing on your other two blessings? It’s been two years. Why don’t you want to just put it behind you as just ‘something that happened in the past’?”

“OK. first of all, in many ways, it does define me. It just does. I am not the same person that I was before this happened. Therefore, by definition, it has defined me. But second of all, I think we are defining anger differently. I am not ANGRY…. like ‘I’M SO MAD!’ kinda anger… I am angry that I was forced to live through that experience. But not like, bitter anger. It’s more like, like …..”

We dropped the topic.

Two hours later we got on the plane. I (so unusual for me) still had more to say.

“Ya know… back to that topic…. I don’t want to forget about it and just put it behind me. I actually like talking about them. They are my children. You would never say to someone who lost a parent ‘put it behind you…. why do you want to talk about that'”

“But you never held them. You never looked at their faces, or saw them smile.”

I was surprised he said that. I know a lot of women would be appalled to have someone say that directly to them. I wasn’t. I was sort of touched. It was so… honest. I really felt like he was trying to understand my head.

“You’re right. I didn’t. And that’s really sad. But it really has nothing to do with the love I have for them. I love them as much as I love my other two children. I just don’t get to raise them.”

And with that, I think I saw a glimmer of understanding come across his face. And then, I felt at peace with the conversation. I closed my eyes and tried to get some sleep before we landed at 6am.
____

Today was the Pregnancy and Infant Loss Memory Walk at our local hospital.  I taped an oversized Sunflower and Daisy to Liat’s stroller and walked there with her. Just the two of us. 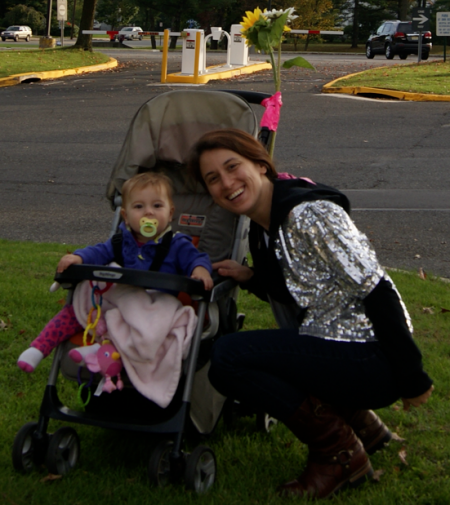 (I wore three Muchness bands, a silver sequin jacket, and my IN TOUCH WITH THE MUCH t-shirt… those things are my versions of ‘liquid courage’…. What? Oh. Doesn’t everyone have hot pink Duct Tape in their house?)

At the walk, a speaker talked about the importance of speaking up about our losses. About how, until those who experience these losses let others know and help them understand what it REALLY is to lose a pregnancy, to lose a baby, it will always be an isolating, invisible sorrow that others don’t recognize and can’t comprehend.

I felt good that I shared my feeling and thoughts with my boss, and maybe brought him a new glimmer of understanding. And so I decided to take that conversation and share it here. Through The MUCHNESS, I plan to educate the world.

One Reply to “Discussing Babyloss with my boss”