They finally came. I didn’t know I was hiding them, but ooh, was I ever. Weeks of feeling stressed, tense, overworked, unfocussed and insecure… all of that wearing a cloak of… god, something else… I don’t know what.

And then they’ve found me. tonight. In the shower. I’d mentioned on my last Still Standing Post that I was feeling regretful about telling Molly about her sisters. Regretful because she’s been acting out, acting tense, and completely beyond rational behavior. We thought it was because I told her about the twins. So we brought her to a therapist. In the first visit, just Elie and I sat with her (the therapist) to explain the situation. She suggested that perhaps Molly felt unable to talk to us about the twins and her feelings. I denied that, saying I always told her she could talk to me, but I also know that she has intentionally hidden her feelings.

HOW ON EARTH IS IT POSSIBLE THAT I PLAN TO TRAVEL TO WISCONSIN AND TALK TO A ROOM FILLED WITH 300 BABY LOSS PARENTS ABOUT CELEBRATING AND HONORING THEIR LOST BABIES, WHEN I CAN’T EVEN DO THAT IN MY HOME?

Tonight, hubs asked me if Molly thought of the twins as her sisters. I couldn’t believe he asked such a question. uh, yeah. Because they’re her sisters. “But they were unborn” (yes- that is the word he used- lord knows where he picked that up. Oh wait- I know- he picked it up from a mindset we carried 4 years ago before we understood what it meant to lose a baby.)

And then, that’s when the tears found me. When I found myself, in the shower, trying to explain to  him, our parents, siblings and anyone else who needs to be reminded (None of these people were actually in the shower with me… I feel the need to clarify that point) that just because OUR daughters didn’t live DOES NOT MEAN they didn’t exist! And just because their bodies couldn’t work does not mean their spirits don’t. And just because they find the idea of dead babies so macabre that I was convinced I needed to have a D&E which (unbeknownst to me at the time)  mutilated their perfect little bodies does not mean that their sister has to be afraid to mention them, to love them and celebrate them the way that I want to, need to, and feel is HEALTHY.

“Just because you miss them doesn’t mean she has to. This is your tragedy, not hers.” …that’s what I was told. Well, actually, fuck that idea. This is actually a family tragedy and I’ll be damned if I’m gonna pussyfoot around my daughter so as not to make her upset. Clearly, that’s not working, and clearly, it’s not what I believe in, so why the hell am I allowing everyone else’s well-intentioned opinions guide my parenting… in an area I’ve gotten pretty damn well-versed in over the last few years.

Sometimes I really struggle with this blog. I started it to share my feelings and then, at a certain point, my feelings stopped being so “interesting” so I blogged about other stuff… Every internet book on the planet says “position yourself as an expert” but ya know what, I’m no expert. I’m just here, struggling to find light every day, push myself outside my comfort zone, take risks- even if they feel like baby steps, that sometimes move me backwards, because I believe my purpose is to just fully be me, and in the boldest, most sincere way possible. That’s what finding your Muchness is about, right? That’s why my twins were sent to me. To remind me that. It’s why they were sent to our family. I will not shelter my living daughters from the beauty that is their sisters. 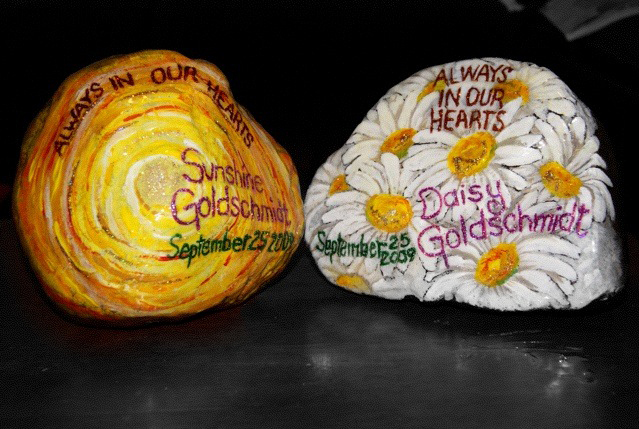 Sunshine & Daisy. Always in our hearts, in our minds, and without shame, with their names on the tips of our tongue.

3 Replies to “The tears have found me”