Every year at this time, for the past 5 years I’ve shared this video with the world in memory of my identical twin daughters, forever nicknamed Sunshine and Daisy. It’s my way of honoring them, letting the world know they existed, and thanking them for all the beauty, joy and blessings they’ve taught me to see in my life.
This year feels different. With so many changes in my life – living in a new state, I have new friends who know nothing about my girls, whose beliefs and opinions I know nothing about. I feel hesitant to share it. Vulnerable.

I don’t want to be known as the woman with two dead babies.

So I’ve been spending a lot of mental energy trying to untangle the emotions around whether to share their video this year.

Simultaneously, I find myself very emotionally drawn into the raging debate that’s been going on- that against Planned Parenthood. The attacks against them and the services they provide anger and frighten me.

After a little soul searching, I decided to finally admit how close these two subjects are to my heart, and to one another.

I know that most people in my “social circle” aren’t giving much thought to PP. They have medical insurance. They are mostly married. They are moms. They may even consider themselves “pro-life.” There is no reason on god’s green earth that they can imagine Planned Parenthood will ever be something they need in their life.

We, as a society, need Planned Parenthood and the services it provides.

Planned Parenthood provides the tools that allow our girls to control their bodies, their choices, their future. Not by (just) performing abortions when necessary, but by empowering girls and young women (and men) with knowledge, support, compassion, general medical care and yes, birth control.

I watched someone dear to me slowly die from AIDS in my adolescence. That experience planted in me a firm knowledge that my body is my own, and it is my responsibility to protect it. Planned Parenthood gave me the tools to do so. When my primary care Dr. balked at giving 18 year old me birth control, Planned Parenthood was there. When I wanted to be sure that a boy I was intimate with was 100% STD free, Planned Parenthood was there. More than once. And let me tell you, there’s nothing more empowering for a young woman to tell her partner she expects him to get STD tested, and then be able to accompany him to get it done. It demonstrated to both of us that I knew my value and that the young men I chose to be with knew it too.

And I was only able to do that because of Planned Parenthood. Because that is what they do. They are there. For women that have no where else to go. For girls that have no one to ask for help. For mothers whose insurance has lapsed and need to maintain their basic health. For responsible young women that want to protect their health and their future.

I promise, when your daughters get old enough, if they don’t come to you for advice, (or if they do and in your naiveté you fail to provide them with what they need,)  you will pray they are smart and responsible enough to go to Planned Parenthood BEFORE they become part of the 3% who use their services for abortion care. 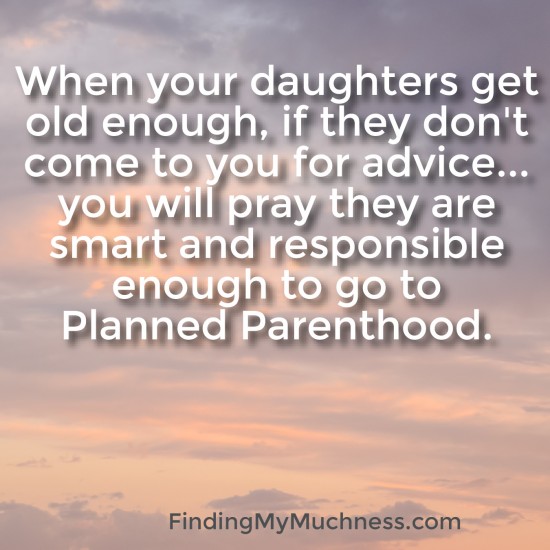 And if you think that that will never apply to your daughter because of the type of upbringing that you’re providing, well, I hate to tell you this, but in the end, there’s only so much control you have. And it’s less than you think. And the less you think it will be *your* daughter, the less likely she’ll come to *you* (or use your insurance at a regular doctor) if it is.

Which brings me back to my beautiful Sunshine and Daisy.
How my heart aches for them. How I love and miss them- especially during this time of year.

When I got married to the love of my life I was one month shy of my 29th birthday.

I marveled at the time to a friend that, after a decade of dating and long-term boyfriends- (I was a serial monogamist) I had never gotten an STD or, thankfully, been pregnant.

I’d “made it through” my sexually active single years without any catastrophes and was now getting married. A small amount of luck coupled with a hefty dose of wise choices. All was right in the world.

Our first daughter arrived 18 months after our wedding. Perfect. We were perfect. Life couldn’t be better.

A year after her birth we conceived the twins. Oh, identical twins! Look at us! Clearly, we were chosen! We’re amazing! Fantastic! People go crazy for twins! We’d be so popular! Everyone was gonna wanna talk to us, know us, be us! I knew that must be true because all my friends who had twins regularly confirmed it. But shhhhh… It’s a specialness that only twin moms talk about in the company of other twin moms. We don’t want to make those “ordinary” moms of singleton babies jealous. …or more jealous. Obviously they’re already somewhat jealous. Duh.

And then, from the peak of our mountain, in the span of two short months, it all went to hell in a hand basket.

TTTS (Twin-to-Twin Transfusion Syndrome) first reared its head at 16 weeks. The next 8 weeks were filled with stress, anxiety, tears and twice weekly hi-level ultrasounds at a hospital a state away.
The doctors were optimistic.
Everything looked like it was going well.
And then, to everybody’s surprise, at 24 weeks they were gone.

At our 23 week ultrasound, after jiggling that ultrasound wand a little too forcefully on my giant belly, after asking me if I’d eaten anything that day (“I just had an oatmeal cookie-does that count?” “Yes.” the Dr. replied) they told me that some time since our last appointment Daisy’s heart had stopped.

Immediately I knew. Without even a split second to mourn for just Daisy, I knew what it meant.  We’d talked about it. We knew the consequences if one of the babies died without having had laser surgery to disconnect their blood flow from one another across the placenta. Laser surgury is often used to treat TTTS, hopefully saving both babies. But even when it doesn’t, it can usually be expected to protect the survivor if their sibling dies. We had not qualified for laser surgery. Our case “wasn’t bad enough, yet” to warrant the risks.

Until it was too late.

Because they were connected through a single blood flow across their shared placenta, deoxygenated blood, created at the moment of Daisy’s death, could find its way into Sunshine and create, essentially, a devastating stroke with catastrophic repercussions.

Because of the legalities of the 24 week abortion ban in NY we had less than 17 hours between the discovery of Daisy’s death and having to make a choice for our Sunshine.
And so we did. We made the best choice we knew to make in an impossible, devastating situation.
We made a heartbreaking choice I wouldn’t wish on my worst enemy.
We made a choice that would forever change me at an almost cellular level.
We made the right choice. For us, our marriage, our future, and ALL our four daughters.

Although I knew technically it was one, it was years before I could refer to “our choice” as an abortion. Abortions were something that irresponsible kids had to deal with, not married women who actually wanted and loved their babies, right?

And we thankfully had the support of those close to us. I assumed anyone in our shoes would. Surely, everyone would understand that we’d made the best, most loving and responsible choice we could, right?

And the legal fight for abortion rights? That wasn’t MY fight. Certainly legislators weren’t trying to tell heartbroken women LIKE ME when they could and could not make a choice, right?

What I found were women chanting things like “Keep abortion legal…” -YES! I thought.
“For any woman at any time!”– …whoa whoa whoa.
Wait a minute.
Not “any woman”– and not “any time.” I thought.

I’d just lost my twins – I should’ve still been pregnant with them! They wanted me to chant about “any woman at any time” when I would’ve given all the money in the world to still be pregnant with my healthy twins?
I just couldn’t wrap my head around it. I literally could not say the words. I left there numb, not knowing what to feel.

It’s taken years for me to fully understand what the abortion rights activists are really fighting for with those chants. Years of watching as legislators have slowly, manipulatively, dishonestly and frighteningly been working to chip away at our right- as individuals, as women and as families- to make these choices for ourselves.

I may be inclined to feel judgement towards a woman having a late trimester abortion for a healthy fetus (something so incredibly rare) or a woman who has had multiple abortions but I’ve learned that just as I don’t want to be judged for my choices, though I’m sure I will be, I’m in no position to judge others for theirs.

What I’ve learned is that those whose judgements actually impact our lives paint their judgements with a very broad brush. To them, I am no different than the woman who they categorically describe as “using abortion as birth control” or just “forgot” to get an abortion until it was almost too late.

So as much as another woman’s abortion story may upset me, it is my responsibility to defend her rights because to the people painting the bigger picture- we are one and the same. If her rights aren’t defended, neither are mine.

My grandmother is a Holocaust survivor. She’s told me about watching, with her own eyes, Jewish people beg for their lives from the Nazis. They were so assimilated they barely thought of themselves as Jews. “Don’t kill me! I’m not Jewish!” They cried.  But to the Nazis, they were Jews. And they were the first to be shot. It didn’t matter how they saw themselves, it only mattered how they were seen by those who attempted to control them.

You may think this fight for abortion rights isn’t your fight but you’re wrong. As women we have a responsibility to one another, because to those making the rules, we’re all the same.  Just because you can’t imagine needing a Planned Parenthood or an abortion, doesn’t mean that you won’t personally suffer the consequences of not having access to one. 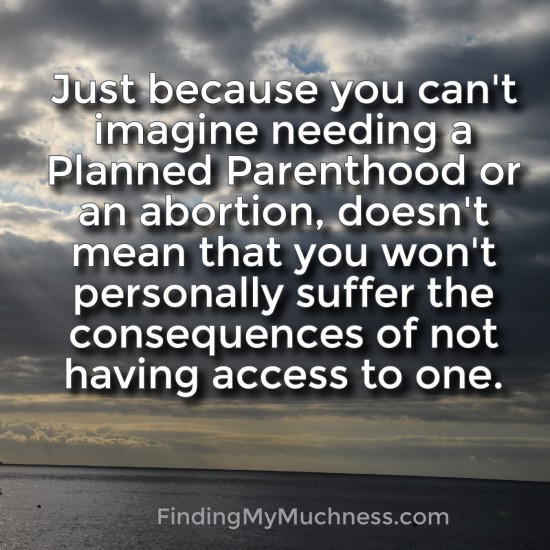 So, I’m sharing their video and I’m sharing their story. Their WHOLE story.
I share because TTTS is a motherfucking asshole and I want anyone who knows anyone carrying identical twins to make sure they know the risks and are receiving appropriate care.

I share it for the thousands and thousands of women who’ve lost babies or made the same heartbreaking choice that I did and feel alone, angry, isolated and helpless. You Are Not Alone.
I share it because I made a choice and that choice allowed me to pursue a beautiful life with no limits.  That means pushing myself outside my comfort zones and remembering to find and create joy in my every day.  It means reaching out to help others where I can, and reminding them that there is beauty in their every day too.
And I share it because among the many, many things I am, I am also a mother of two dead babies, and sharing them and the lessons they’ve taught me is how I continue to mother them.