I know… this mornings post was less than emotionally moving. I was feeling stressed about all I had to do today and the fact that I just wanted to make sure I did the days challenge.

Which is really good enough, but in the end, it wasn’t good enough. Because a couple of hours later, I actually did have a Muchness Moment and knew that was really the picture I needed to post. 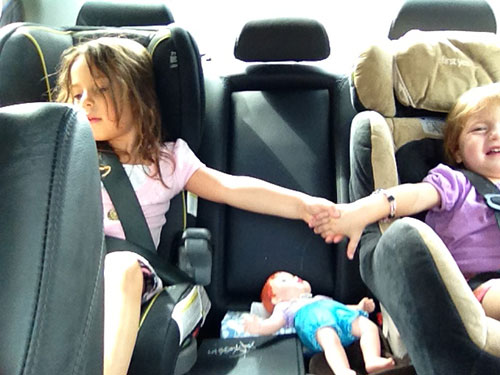 Liat was overtired and having a meltdown. We were getting into the car and she just wasn’t having it. I tried the nice way, Elie tried the nice way, but ultimately, we just had to put her in, despite her protests. Molly sat next to her and tried calming her in that big sister way but it wasn’t working either… until she reached out and held her hand. And then Liat calmed down. And it melted my heart. One of the things I grieved after we lost the twins was the relationship that Molly would have had with her twin sisters. They would have been just 19 or 20 months apart in age. I thought that if I had another child, either it would be a boy or the age difference would be too great for them to be close friends.