Liat right now is the same age Molly was when the twins died. Just under 18 months.

I’ve been looking at Liat, studying her, trying to remember if Molly was the same as her at that age, but it’s hard to remember. So much of that time is just a blur. Liat, at 18 months, mumbles a few words- like book, ball, more and done. She enunciates very clearly and loudly the words MOMMY and DADDY. Usually too early in the morning. She crawled right on schedule, has been walking for months and runs like a champ. This is all in contrast to Molly. By 18 months she was talking a mile a minute. She was singing Happy Birthday and already telling me what to do. But she was only starting to take a few steps. And she never crawled. Never. Instead she did this butt shuffle thing across the floor, and she could do it at lightning speed. I used to joke that she was too much of a princess to get on her hands and knees and face the floor. Now that she’s four, I realize that wasn’t much of a joke. It was foreshadowing of the truth. She is a princess. A very smart, intuitive princess.

I have this one clear memory of Molly from that time that always sticks with me. When I was pregnant Molly came up to me one day, lifted my shirt, touched my belly and said “baby”. It was so smart and I hadn’t told her that there was a baby in there, but somehow she picked up on it. I remember I was surprised and told Elie and scooped up Molly and kissed her and told her yup! That’s a baby— in fact, it’s babies! My sister had bought her two little baby dolls – ‘twins’ as it were. They were about 10″ long and I remember reading in my baby book that the babies were about that long for my gestational age. I put the dolls on my tummy, sorta spooned together yin-yang style and showed her.

After that, she’d come up to me every day and do that. Lift my shirt and say baby. Pretty soon I got her to do that and kiss my tummy too. I loved it.

Then the babies died.

I had a D&E to remove the babies from my body. I was the first appointment of the morning. I was home by noon. Later that day, I sat on the floor playing with Molly. I was in shock, still completely numb to what had happened. Molly came over to me, lifted my shirt and patted my belly and said “babies.” I looked right at her and said “No more babies” and started to cry. My not yet 18 month old looked up at me with the most intensely understanding and emotional brown eyes. She pulled down my shirt over my tummy, scootched closer to me and wrapped her arms around me. She never pulled up my shirt again after that. Never mentioned the babies.

I thought at the time that she probably understood that something had happened, but I didn’t ever sit her down and explain it. Sometimes I wonder how much she understood, and if she remembers.

When I got pregnant with Liat it took a looong time for me to tell Molly. We both sort of ignored it till maybe my 7th month. It was almost a full year since we’d lost the twins. I eventually started talking about how she would be a big sister, we bought a ‘big sister’ book and slowly, she started to acknowledge my tremendous belly. We put heart stickers on it 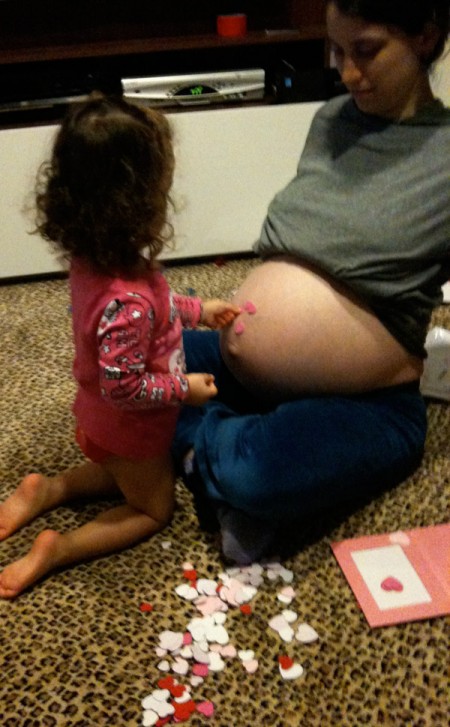 and she put her handprint in paint 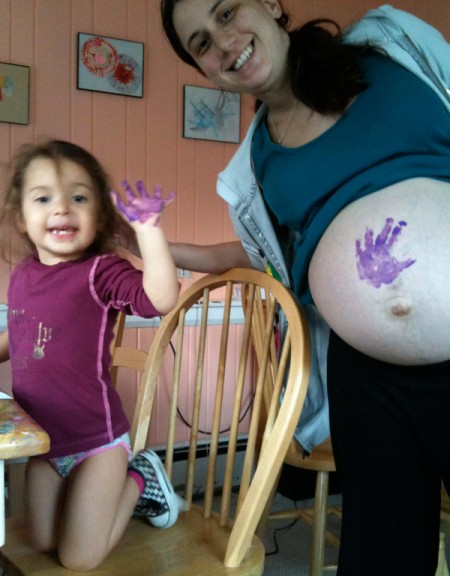 and I did whatever I could to create positive pregnancy belly thoughts to counteract the negative ones that were somewhere in her baby subconscious. And in my own. I videotaped my tummy dancing up a storm.

Elie and I spent one evening painting my tummy. We used paint and traced the veins that were all over my body. then we added leaves and flowers and called it The Tree Of Life. 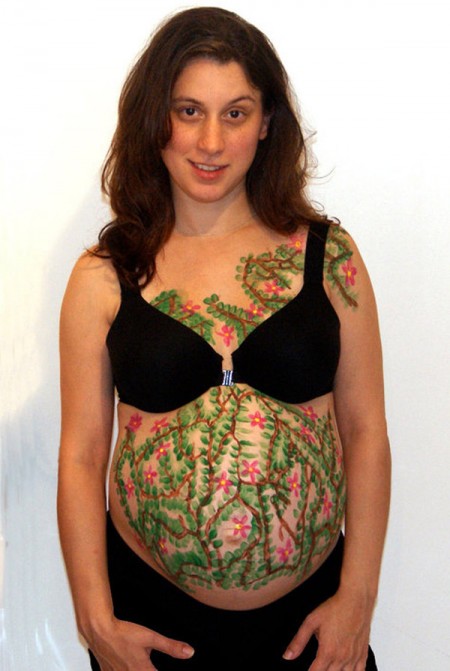 I guess I’m feeling sentimental for pregnancy. For the anticipation of every moment. The feeling of a baby living and growing inside of you. Of the twins, who filled my body for 6 months and were a miracle and blessing all their own. Even though they died inside of me and brought me a grief and sadness unlike anything I’d ever known. They also brought me a love, a depth and empathy like I’d never known. We’re not planning to have another baby. The plan was two. From the day we met. The only time I ever wanted more than two was during those six months when I was expecting three. And for about a year and a half after that. And in moments like this at 2 in the morning.

That’s all for now.

18 Replies to “Reminiscing about being pregnant. And other baby and dead baby stuff too.”