It’s been a long while since I Checked in. The longer I wait between posts the more difficult it is to post. Writers block kicks in and I feel all apologetic, but talking about that isn’t exactly riveting blog content so ill just get to it.
This year is ending with a major bang. I’ve spent the last two months writing, funding, printing and shipping my first book and preparing for my TEDxWomen talk which was an awesome event ill share more about soon. These are both major achievements and though they took a ton of my time, energy and focus, I felt on top of the world while they were in progress.
And as soon as they were done, I crashed. Just crashed. Seriously. Emails went unanswered, calls unreturned, and I vegged in front of the tv watching season finales of reality singing competitions that sucked and left me with an internal mild feeling of self-loathing at my laziness.

And now, Christmas. Although I don’t celebrate, it is a holiday that still carries with it the feelings of the end of year blessings and new beginnings.

Our family tradition is Atlantic City on Christmas. It began in 2005- the year I met Elie, we drove down for an AC Christmas date in the hotel pool. (I remember the string bikini I wore. Oh, how flat and taught my pre-30 + 3 pregnancy belly was…) and in the 7 years since have been here at least 5 times.

Getting away is always a great way to gain perspective and unwind from the day-to-day routines.

It’s here that I see my kids getting bigger, running through the ginormous hotel lobby. Here that I take stock of my year and what I’ve achieved. And here that I inevitably remember that moment in my hotel bathroom, on my honeymoon, when I realized the kind of man I married.

He’d taken a shower and used the towel that was on the rack above the toilet, within arms reach of the shower. The other towel was further away , but still close.

I hopped in the shower and while in there, Elie came in to the bathroom to brush his hair or whatever.

When I turned off the shower I reached out to grab the towel and found it right at the edge of the towel rack, waiting for me exactly where I needed it. He’d seen that it was a bit far and slid it close.

This is so not a big deal, but something about the thoughtfulness if it impacted me greatly as u wrapped myself in its plump softness. I had married someone who would be looking out for me, thinking of me and trying to make life easier for me every step of the way.

This past year hasn’t been easy. It’s been 14 months since I left my full time job to follow my passion and share this message I’ve been gifted to share.

I’ve often said I don’t know what I’m doing. I’ve made a ton of mistakes. I’ve learned a whole lot and still remade the same mistakes. I’ve wasted money. I’ve lost opportunities. I’ve procrastinated. I’ve been paralyzed by fear. I’ve chickened out. And I’ve put my family in a place of financial uncertainty.
And yet, this man still supports my vision. He supports my independence. He believes in me, even despite his own fear and stress. He still slides the towel over to make it easier for me, when he can.

I didn’t plan on making this post about him. I planned to make it about being grateful, counting blessings, and sailing forth in out MUCHNESS into 2014, to kick muchy butt and take names.

…but somehow it’s about him. Because without his support, I’d be having panic attacks under a table at a job that feels like a prison cell.

He’d kill me if he read this post, which he likely won’t because as much as he believes in me, he has no interest in my blog. 🙂

What will be your driving force to kick butt in 2014? Mine will be the promise I made to myself while drying off in the shower that day on my honeymoon. To always remember to be the kind of wife that slides the towel to be in arms reach. 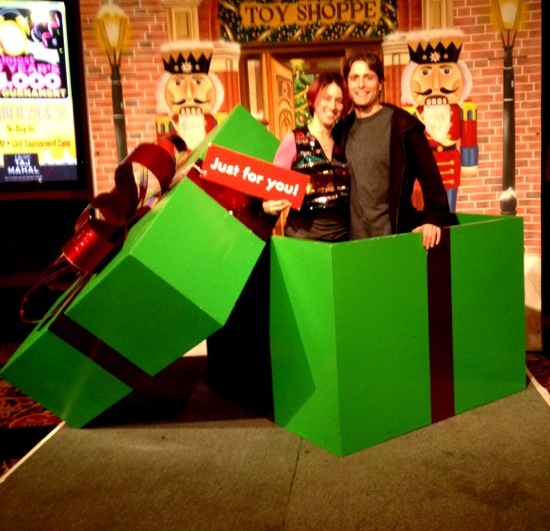