Back some time ago, in May of this year, I think, Elie and I packed up the kids in the car and headed to Brooklyn to see some friends. It was one of those days when everything just was not working. When the moments just feel out of sync with each other. The kids were moody, we were disorganized, running late and  the day carried with it that unease where everything that was spoken never felt like it landed anywhere.

Finally, we got our acts together just enough to get into the car, buckle in the kids and get the heck out of the house.

We hit the road and almost immediately hit traffic. Unless I am on the way to the airport, in which case traffic can cause me to hyperventilate, I’m never really that bothered by it. We kept going assuming it would let up, and as we inched slowly passed the last exit before the bridge, Elie asked me one last time if I was SURE I wanted to go ALL the way to Brooklyn fighting this traffic with the kids in the back seat, who by now were whining for snacks and potty breaks.

I insisted. I really wanted to see my friend and I really like spending a sunny day in Brooklyn.

We went through the toll, which these days costs as much as dinner for two at a crappy restaurant, and continued inching across the bridge.

I realized this traffic was probably going to get worse in Manhattan before it got better. I realized that it was entirely possible we were going to spend 3 hours in the car. I realized I should have listened to Elie.

And so, I told him we should turn around.

He was not happy.

I was not happy.

The kids were not happy.

I pulled out my phone and said I would find something for us to do in New Jersey. Because that plan would have been too easy 45 minutes and $12 ago.

I saw that there was an arts and kids street festival in Hoboken, which is a town situated between where we were and where we live.

The last time I was in Hoboken was in college. Back then it was a party town filled with bars frat boys and sorority girls. The kind of folks that went on booze cruises and grew up to become stock brokers and dentists. At least that’s the way I categorized it. The artists I related to moved to Brooklyn and grew up to become… I have no idea what.

Turns out, Hoboken has grown up too. It’s now filled with strollers and families and arts and culture and all sorts of things that I like.

I decided that I was going to adjust my mind-set about the day and redirect my energy into looking for the “Why.” I concluded there was a reason we ended up here- a place we never would have ended up, if the day hadn’t started out so crappy. And if there wasn’t a reason, I was going to create one, dammit!

So I slapped a forced smile on my face, bought us all some street-roasted corn on the cob and started looking for the Why.

And there it was.

At the time I was in the middle of a speech writing course from KC Baker. She teaches women how to write & deliver the talks of their lives. I’d won a scholarship to the course and was so filled with gratitude to be in it.

The Holy grail of public speaking for many people is TED.

Ted talks are a worldwide non-profit devoted to giving people a stage to present their Ideas Worth Spreading. Giving a TED or TedX talk is a huge honor. (TedX are local events sponsored by the TED organization.)

So, right there, in the middle of the crowd were two dudes standing near a table wearing TedXHoboken T-shirts.

I shoved all my natural shyness aside (yes- that exists) and walked up to them to ask them about the event. The invited me to attend as an audience member. I replied, “Oh- actually, I want to speak.”

I’m pretty sure that’s not how these things usually happen.

They suggested I contact the organizer of the event, but chances are pretty definitive that that was not going to happen.

I contacted her anyway. I needed to prove my Muchness Theory right- that when we look for the opportunity in every moment, we give ourselves the potential to create them. I also needed to justify the $12 I spent on a toll to go nowhere.

And I did. I proved my theory right.

When the event happened in June I was called up from the audience to share the Muchness in 60 seconds or less. And I did. And it was AMAZING. 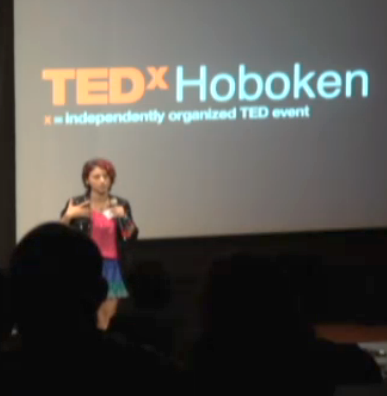 It is those 50 seconds (I came in under the limit!) that let me know, in no uncertain terms, that public speaking is meant to be a part of this journey for me. It rekindled a part of my Muchness that has, for so, so, so long gone underground. The last time I stood in front of a room full of people and spoke was when I played the tin-man in my seventh grade play.  I didn’t even speak at my wedding. But those 50 seconds made me realize that in some ways, the things that fuel our Muchness the most are the ones we stay farthest away from, for fear  of doing it wrong or not meeting our own, or other people’s, expectations. I didn’t even know I wanted to do any kind of public speaking. I would have said, if asked, that it was totally, totally something I had no interest in, and I believed that was the truth.

I’ve spoken a number of times since then, at a B.I.G Womens Business and Personal empowerment meeting and, most recently, at a remembrance walk for babies gone too soon.

And then yesterday, I got an email that had me bouncing off the ceiling.

The organizer of the TedXHoboken talk is taking on a new project. TedXHobokenWomen.

“This may be your lucky day!” she wrote and included a formal invitation to give an actual TedX talk!! (Look! I’m even on the speakers page– next to some overwhelmingly impressive women!!)

Despite sitting still long enough to write this all-together too-long blog post, I am still bouncing off the ceiling.

I think the most important lesson I want to hold onto and share with you is this:

1- In every moment we make a choice to lean into the crap of our moment or look for the possibility that exists there. It’s really easier to lean into the crap. At least a lot of the time. Sometimes if feels like not leaning into the crap is almost like trying to defy the pull of gravity. Do it anyway. You can. Even just a little bit at a time.

2- You don’t have believe everything you think. I actually saw this on a bumper sticker the other day while driving and got this awesome shot while stopped at a red light: 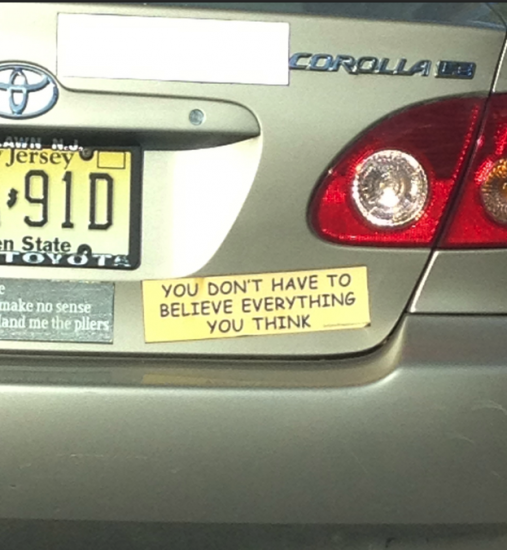 I totally had no intention of adding this pic to this post but look how well it fits! For years I told myself I had no interest in public speaking, and I believed me! Yuck. That was a lie that somehow grew into a false reality. Now that I realize this totally happens, my mind is racing with all the potential stuff I could be doing and loving if I wasn’t so busy lying to myself all the time.

Next up, I’m pretty sure I wanna try the trapeze. 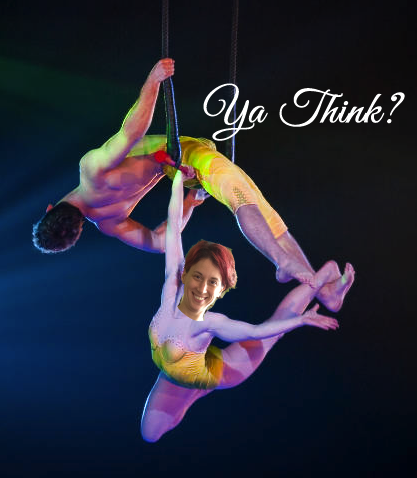 4 Replies to “Muchness mind-shift: Turning a crap day into something amazing.”