Unless you’ve been living under a rock, you can’t help but notice the overwhelming amount of neon people are wearing these days. In my head, there is but one association I have with neon…. Please…. Join me on my trip down memory lane….

This could be the back of my head: 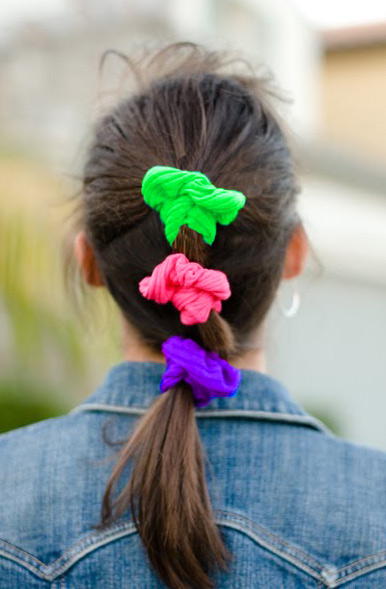 My bedroom walls are plastered with pictures of the New Kids on The Block.  I told everyone Joey was my favorite because he’s the sweet one.  But secretly, I liked Donnie more, because he’s the bad boy.

And this was my Muchness:

That girl in the audience with the 4″ tall hair and Fluorecent Pink t-shirt with the smiley face on it…she was my Hero.

But Anyhow. Here we are 2012. Everything old is new again. Except The New Kids. They’re just old.

The nostalgia of the fluorescent trend is really exciting to me. Months back I posted about this Neon yellow bag I saw some chic carrying and how much I adored it. But wouldn’t wanna spend the money on it. And a lot of the affordable neon, well, it looks like something I may have worn in 1989.

And then. Friday, I was at Home Depot and came upon this: 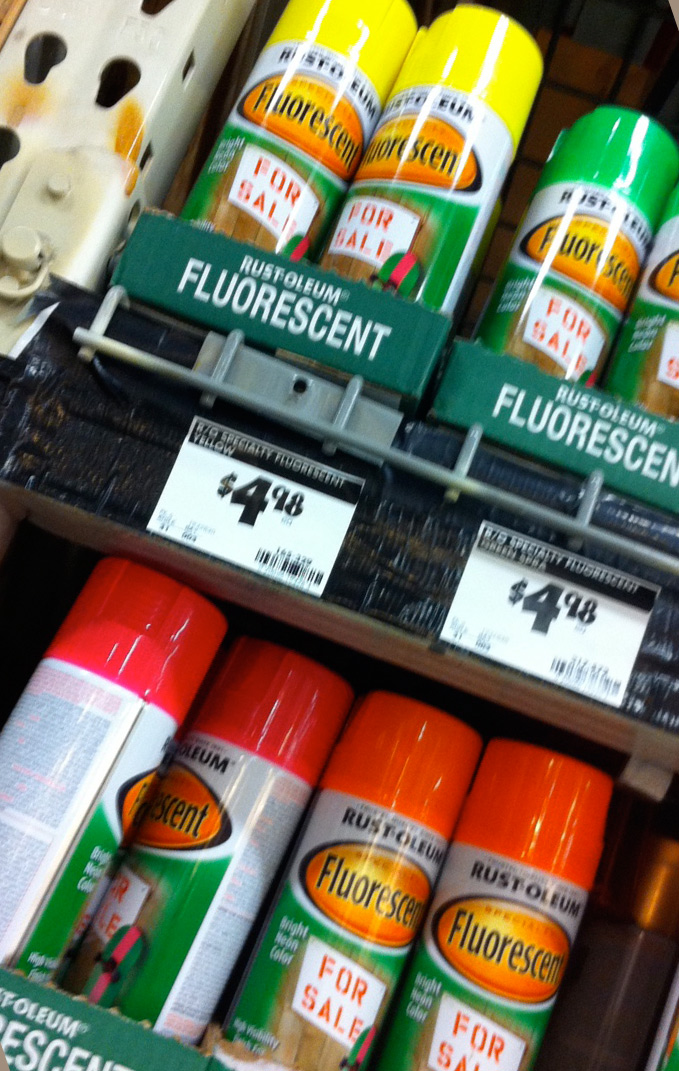 My brain raced… Oh! The Muchness I could make! I don’t have to invest $300 on a trendy pair of shoes… I could get creative! I stood in the aisle for 5 whole minutes, debating between the pink and the yellow. or maybe the orange. or the pink. or the orange. pink. yellow.

I bought the yellow. And I bought Painters tape. Because I knew I’d recently used up what I had on this. Everything else for my master plan I already owed. 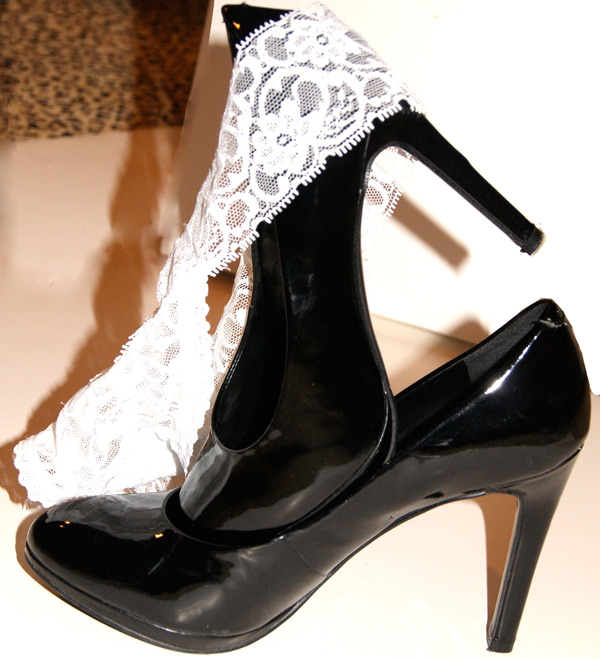 Black Patent heels from target. (I could’t justify buying these new ones until I found something to do with the ones I already own.)
Unworn lace thong panties.
Painters Tape.
White spray primer
Fluorescent Paint
Triple Glaze Spray Gloss
Rhinestones and E6000 Glue

I cleaned the shoes and then used the painters tape on the parts I didn’t want to paint: 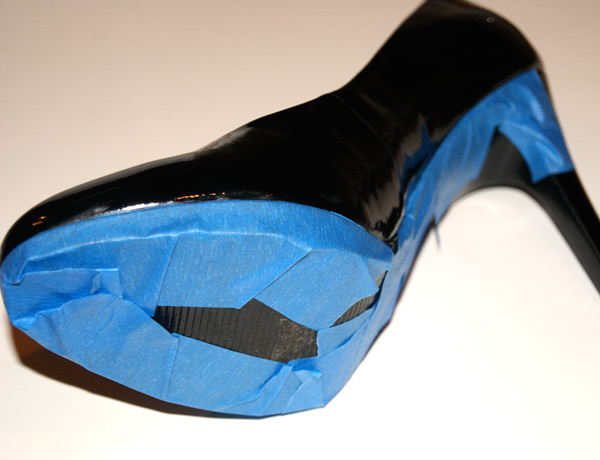 Then I used more tape and lace to cover random parts of both shoes. 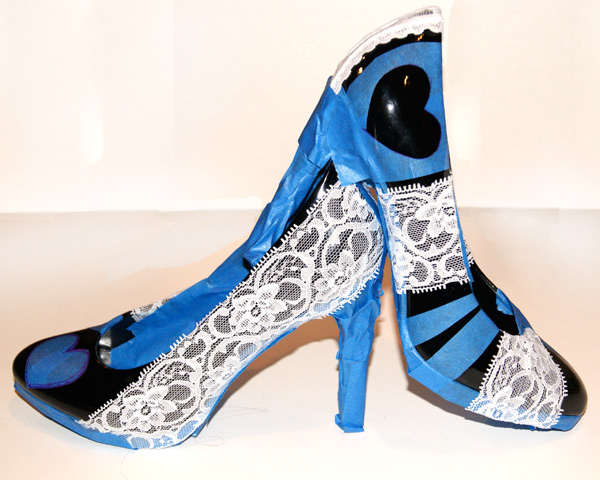 I cut shapes out the the tape. It was only after I cut out the heart for one shoe that I realized the inverse would be awesome on the other shoe. I also originally thought I’d make them match each other but then it occurred to me that if they were even a tiny bit off, it would annoy the crap outta me. So I creatively solved that problem by making it a non-issue.

After taping, I took the shoes to my basement and sprayed them white. Twice. 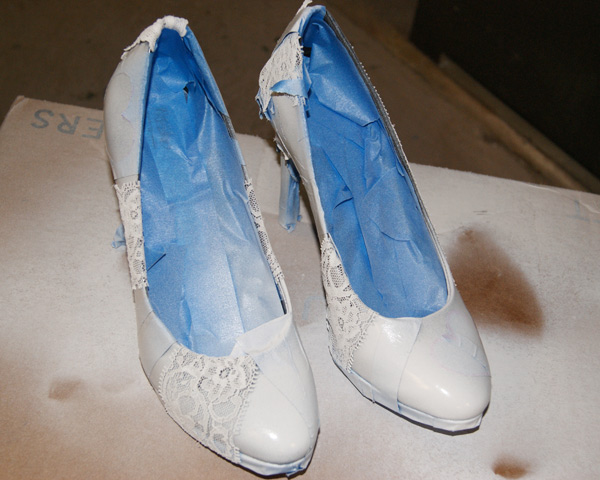 Then I sprayed them fluorescent. Twice. 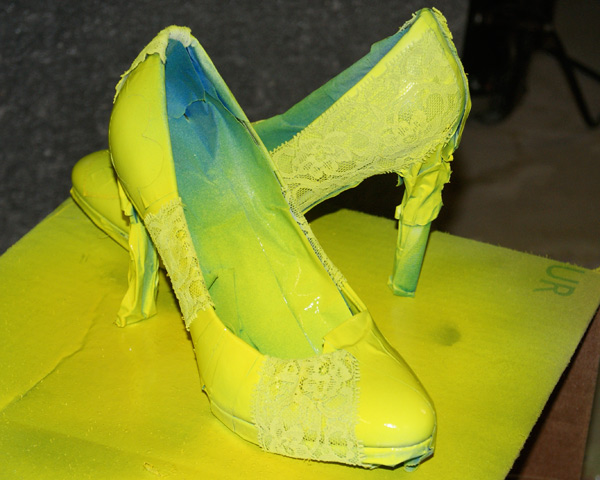 Then I sprayed them with clear glaze. Once. 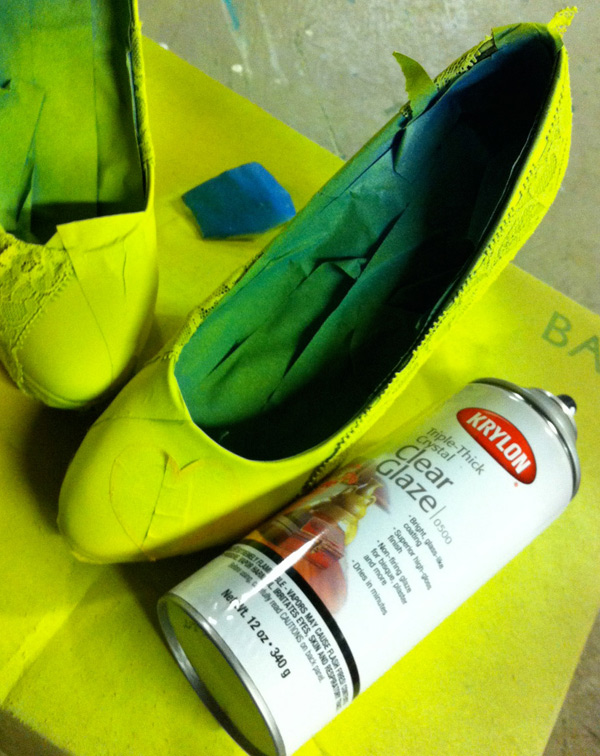 Then I brought them upstairs and while watching “The Voice” and contemplating Christina’s Funny hat, cut the tape off. I had to use the blade to slice the paint before pulling the tape. For the most party it came off slick and sharp and clean. 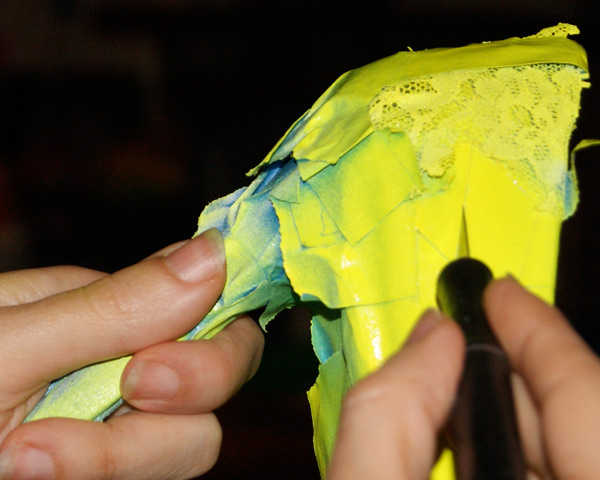 In other places, not so much. 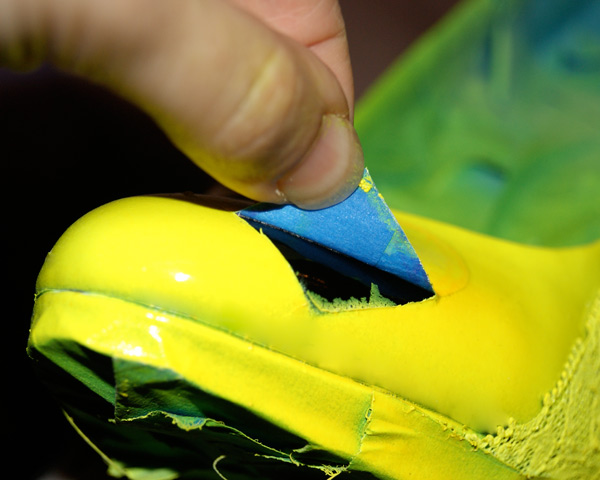 I used a black sharpie to clean up any smudged edges.

I also used the sharpie to recreate areas of the lace that were too misty and unclear. 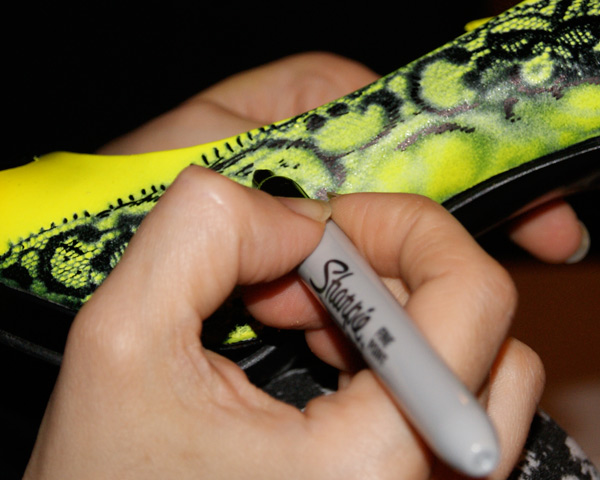 Then I sprayed the whole shoes again with clear glaze.

Then I carefully placed the rhinestones around the hearts on both shoes. 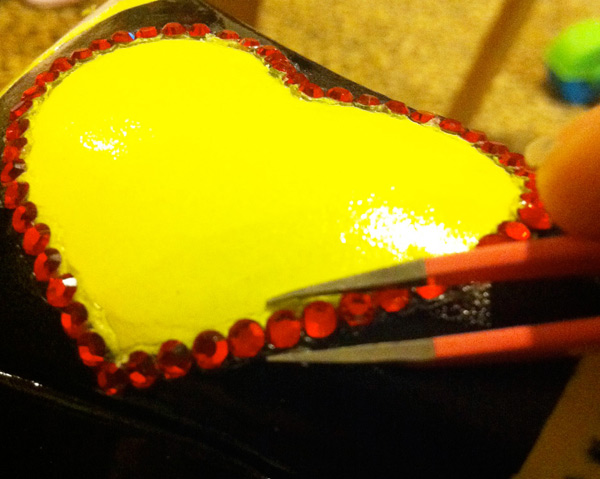 Then I stared at them because I could not get over how much I friggin’ loved them. 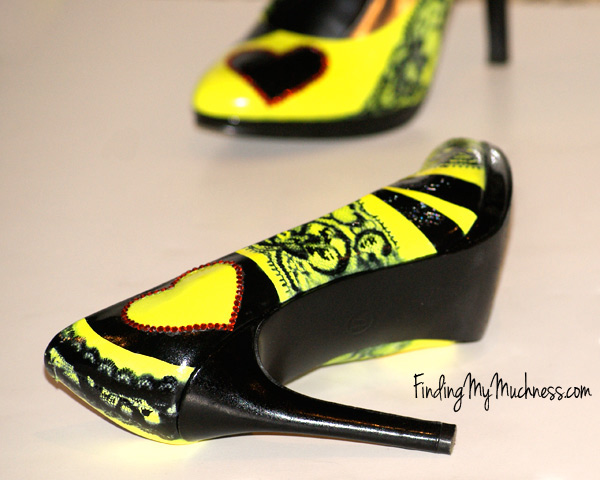 Then I took about 4,000 pictures in different poses. 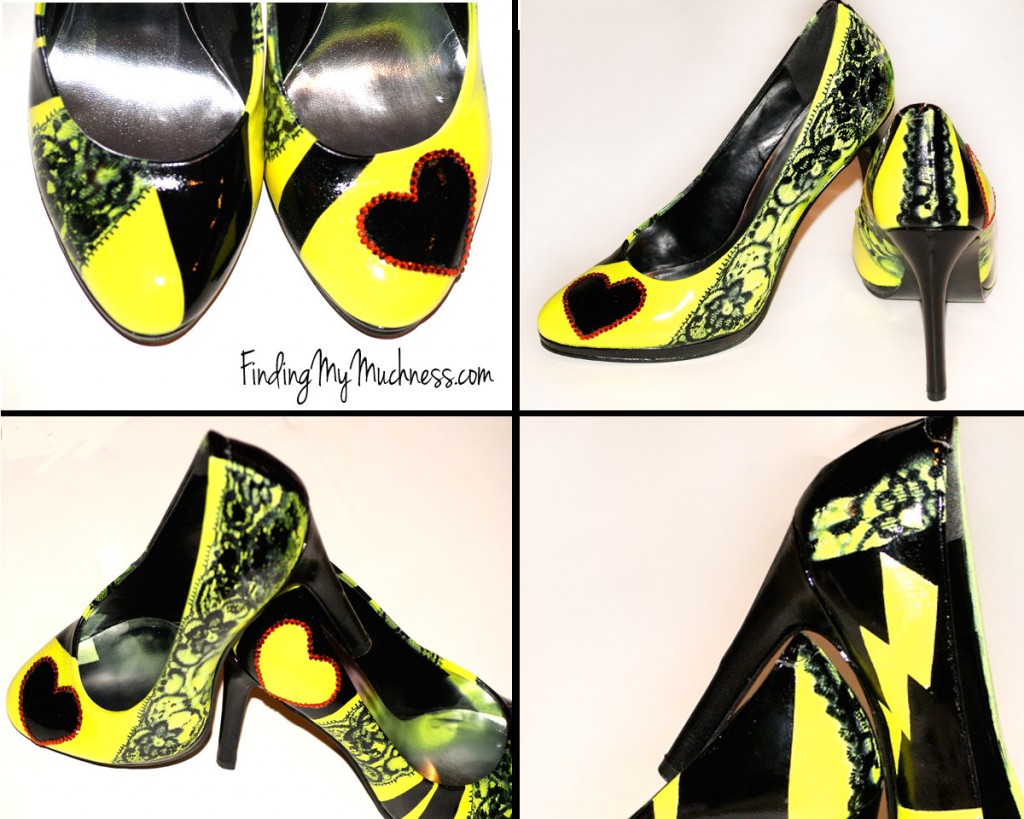 Then I finally tore myself away from them and went to bed. It was like, 3 in the morning.

Then I wore them to work the next day. Here they are on a bike path in midtown Manhattan 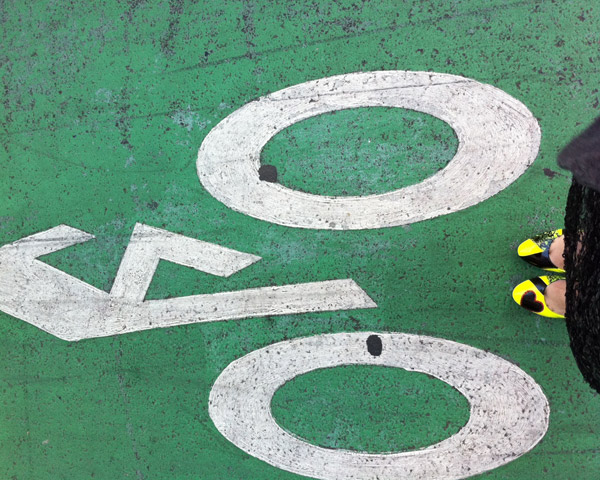 Seriously, Every time I looked down I got a small buzz because I thought my feet looked so muchtastic!!

…Then one of my co-workers told me she thought they made me look cheap.
I’m pretty sure she’s just massively jealous. Right???

2 Replies to “Muchy Shoe Makeover!!! (and a bunch of other ramblings….)”