Originally posted by Tova September 23. 2011 / Reposted after The Great Server Crash of 2011

As I mentioned last night, I went to bed feeling fine and enjoying that moment while I had it. Because I woke up feeling not so fine. The 23rd. What a shitty day that was. That was the last day either of my girls lived inside  of me. The day we said goodbye to Sunshine too. I look at the little ticker in the corner of this page: 1 year, 11 month, 4 weeks, 1 day. That’s lots of words. In two days, it will just say “2 years”…

I opened my iphoto this morning to go pull some pics of my newest Muchness bands to get them ready to put on the site and while scrolling through my photo library I got pulled into pictures of Elie’s 40th birthday party. It was in November of 2009. Less than 8 weeks after our loss. I’d decided that I couldn’t let his birthday pass without something and it was an excuse to create some joy and celebrate the things we did have. It was on a  sunday night. It was supposed to be a surprise. We spent the day getting massages at a fancy spa near me. My boss had given me a very generous gift certificate after we lost the babies. It was a nice day. I remember the women who gave me the massage was chatty (for a masseuse) and somehow I mentioned that I was there as a gift because I’d lost identical twins recently. She told me she had a twin sister. I asked if they were identical. She replied “we used to be, but then my sister got fat.”   …something about her stupidity struck me even more than her callousness.

But anyway, that’s not the point. We came home from the massage and our house was filled with friends and family. I have NEVER seen such a turn out to a party in my life. Nearly everyone who was invited made the effort to be there, and it was appreciated. I thought at the time it was pity. “Awww, poor Tova and Elie, after all they’ve been through, the least we could do is show up at this party they are hosting at a not terribly convenient time.” And maybe it was pity. It’s OK. I was glad they were there and I think they were glad to have something they could do to show support.

Oy! Again, Not the point!!! The point is, I saw this picture in my iphoto. This one and a few others from that day. 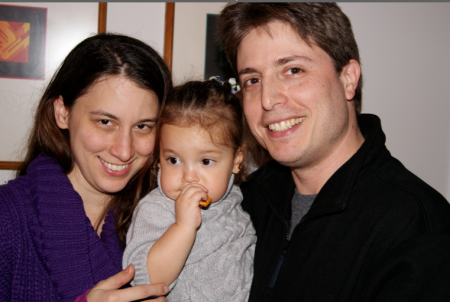 I looked at my eyes, my smile, Elie’s eyes. even Molly’s, and I started to shake, and then cry. That party, that was a good day. Maybe the first good day since the loss. But there is so, so much sadness there. so much grief. so much pain, hidden behind that smile and those eyes. I used to look at these pictures and think “These are bad pictures, I don’t look so good” but now I see it wasn’t the pictures, and it wasn’t how I ‘looked’ …. it was everything else.

I needed to get this out before I can get done the 100 things I have to do today. But I want to end on a happier note. Here is a picture I absolutely LOVE from this past summer. This picture is joy. With my sun and daisy necklace, my sparkly muchness band. Our honest smiles that go deep. It’s Muchness. It’s my family. 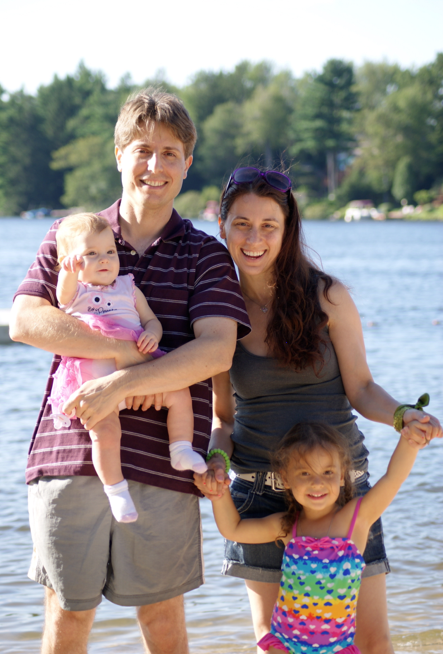 Sending you love, Tova. I’m glad you have come so far….

you have a wonderful way with words, Tova. I felt the sadness and the joy all smushed together. much love from someone who “gets it”…

Tova, I am thinking about you today as you think about your little girls. What a wonderful way to honor them — with your words and, of course, this site!
I can see/feel the joy and light in the second picture.

Btw, how could it escape me that we share a day *your girls’ angel day and my girl’s edd*?

Jen- I didn’t know that either. Or maybe at the beginning of this journey I did? What a long, strange trip it’s….. continues to be…

Hi Tova.
I didn’t realize that our dates were so close…I’m glad your rainbow joined you the next year..I had a second loss the year after, but my rainbow has finally come! Wish I had known last year about the Muchness movement. :0)
L’shana Tova!

Julie (another woman who gets it…)

Julie- you know about it now! Even I didn’t know about it last year!!! Welcome to our little corner of the internet and congrats on your rainbow!
xox