I wanted to write about today.

I felt like the twins were visiting all day… and now, into the night.

This morning I woke up invigorated.

I took Liat for a walk to the coffee shop. In the coffee shop sat a dude I’d never seen before- except yesterday. He was there yesterday. And he’d talked to me about his dog. Today I saw him and said Good Morning. He was wearing a t-shirt with a picture of Johnny Depp as The Mad Hatter. The character who first spoke of Muchness. hmmm…

We walked home. We live on a quiet dead end street where we always see and usually know everyone who walks by. As I got closer to my house I saw two women walking. One pushed a stroller and the other was accompanied by her twin daughters. I know those girls. They don’t know me. Those girls make my heart palpitate. The summer after I lost our twins, those twins, who live around the corner from us, went on a daily walk with their nanny at the exact time I’d leave to go get Molly from Daycare. Every day. Those little girls- maybe 1 year olds at the time, would accost me with their presence. Strolling down the street together, holding hands with their blond hair bouncing in the sunlight, while my twins lay in their graves. God, how I hated those twins. And there they were, now 4 years old, standing in front of my house admiring the hot pink flamingos on my front lawn.

I said Hi to their mother, introduced myself. I chatted with the girls, about their sparkly Toms Shoes. I realized, for the first time, they they are not identical, which helped a lot. I also realize I don’t hate them. I mean, really.

Liat and I went to the backyard where she and Molly were blowing bubbles. I was pulling the weeds out from between the pavers cuz I enjoy that sorta thing. And then, for the first time I noticed this plant in our mini little garden area.

Hmmmm. That’s weird. See, last year, on a particularly emotional night, when we were sleep training Liat and she was crying in her crib, I had a mini breakdown, because listening to her cry tore me into pieces. More than a normal woman. I couldn’t even stay in the house and Elie sent me out. Just Out. I went to CVS and trolled the aisles in a daze, thinking about the twins and how my heart was breaking that Liat was home crying and I was too weak to handle it. And then, in the middle of CVS were some ‘easy grow’ flowers. The only two varieties they had were Sunflowers and White Daisies. 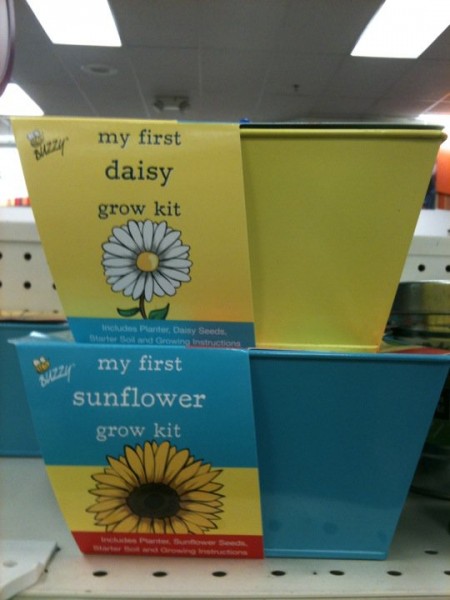 I took it as a sign and though I have never been able to grow a flower in my life, I bought them. And then I planted them, and shortly after that, they budded, just a tiny little bit, and then they died. Go figure. You can choose to read into that as much as I did, (ie: a lot… anytime I’ve tried to grow a sun or daisy they bud and then die…. good, positive thoughts. I should have just nicknamed the girls ‘roasted chicken’ and ‘mac n cheese’ – two things I have created numerous times that have never died on me ) or you can be sane and logical.

Anyway, I took the ones that I believed were the Daisies and because they are perennials and I figured might bloom again this year, I dumped the dirt around my girls’ memorial rock I painted that is in my backyard. Because the Sunflowers are Annuals and I assumed they’d dried up, I think I just dumped the dirt in the trash.

So today, for the first time, I noticed that those leaves that had started to sprout a couple of weeks back, have just grown TREMENDOUS in the last few days- to the point where they cover the pink flamingo that watches over the rock (yes- I have flamingos in the front AND in the back of my house… wouldn’t you???) I’m thinking now that those stems actually are maybe too big for daisies and it’s possible I got the containers confused and they might be the sunflowers that weren’t Supposed to bloom this year… which was kinda cool. I’ll wait till they bloom and keep you posted.

And also, I told Elie. And he seemed to think that might be kinda cool too… or maybe he was just being sweet and didn’t really think anything at all.

But then, as I finished telling Elie, Molly started calling out- “Look mom! Two white butterflies! they like the bubbles! Two white butterflies!!” and those butterflies danced through our backyard for quite a while. Honestly, I was never really one to see these things and think of them in these mythical, spiritual ways, but today, I just did. And even more shocking, I think Elie did too. Or, again, maybe he didn’t really think much of it at all… I’m basing my assumptions about what he thought wholly on the fact that he glanced at me when Molly yelled about the butterflies. A glance. That’s it. I invent a thougfht process he may or may not have had  in his head, based on a glance. However, Maybe it was fueled by the fact that last night he and I went to dinner at a new friends house, and we talked about the twins, their whole story, out loud, for the first time, together. I don’t think we’ve ever done that. hmmm.

There was only one other time when I saw two white butterflies dancing with each other and it struck me  like that. It wasn’t a particularly emotional day but the car I was a passenger in pulled into a parking spot and those butterflies were Right there, in the windshield, dancing like it was their stage, and it nearly knocked the wind out of me. But anyway…

So, the rest of the day passed and was nice. And I’ve sat here at my desk for the last few hours working on some of the really Muchtastic things I have planned to help share The Muchness with the world. As I worked I thought about typing this post but was having a hard time getting focussed so I thought, eh, maybe I’ll just let it pass… not necessary to write about…

But here’s the thing.

As I sat here working, I kept hearing this really irritating, constant, buzzing sound. I’d never heard it before and didn’t know where the noise was coming from.

Above my desk is my huge Sunshine and Daisy framed print that I ordered the day after we lost them. 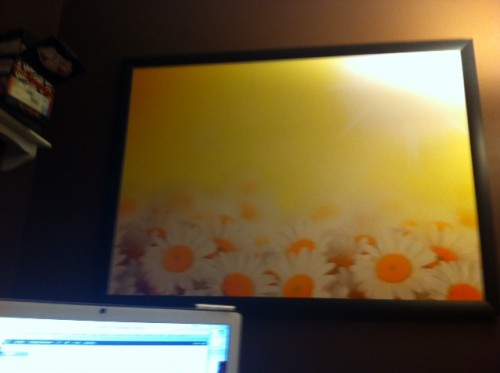 God as my witness, the picture was vibrating against the wall.  Not vibrating like weegee board haunted and possessed vibrating- I mean, I couldn’t actually see it moving, but when I touched it, the sound stopped. When I stopped touching it, the sound started again.

And then I decided to write this post, because that was a little too much for me.

Please, do not think I’ve lost it but if you look at the top of my post I started with “I felt like the twins were visiting all day… and now, into the night.”  and I was going to start by talking about the vibrating, but as soon as I wrote that line, the buzzing noise stopped. It stopped. I swear. that’s why the next line is “OMG. weird.”

It was buzzing for 2 or 3 hours straight before I started this post as I worked and in the entire time I’ve written this post it hasn’t started again.

I wish I knew what to take from the weirdness of this day, from the fact that my logic tells me this is absurd but my heart tells me it’s real.

I skipped the part of  today where I reached into a pile of shirts to grab a gray one I thought was one thing, but turned out to be a shirt I last wore while pregnant with Liat. I put it on and had a moment then too. In the mirror. Seeing a pregnant body that simply wasn’t there.

10 Replies to “No good post title for a good day”