My little one had show and tell today. She decided to bring her doll, Sunshine.

Shortly after we lost the twins we had a visitor who brought Molly a new baby doll. Our visitor arrived with my niece who was about 8 at the time. She’d bought my niece the same doll. One wore pink, the other purple.

My niece left her doll here when she went home, leaving us with two identical baby dolls, where there should’ve been identical babies. Pretty tragic, right?

Anyway, I went on in the depths of my early grief to watch while almost two year old Molly played with the two of them. She’d pretend feed them, put their little pacis in their mouths and arrange the two of them on the steps just so, and then shimmy her little diapered tushy into place between them.

I received a new DSLR camera as a birthday gift from my husband that year- a consolation prize of some sort. He knew I’d wanted one so I could learn to take pictures of the twins when they arrived. I could practically see the pictures in my mind- clear, beautiful shots of their matching faces with Molly, just perfectly out of focus in the background. But I knew with two babies on the way, I wasn’t gonna be able to get that expensive camera.

So when he bought it for me, it was both kind and thoughtful, and also painful and annoying.

But there I was, taking pictures of Molly playing with her twin dolls and imagining, for just that moment, they were real.

I never showed those I pictures to a single soul. Surely they’d think I’d lost it. So here you go: 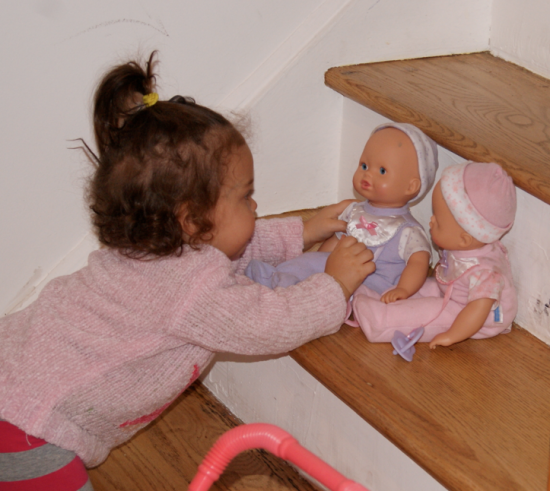 Molly -on the surface- forgot about the sisters she’d been expecting that never arrived.

Instead, she embraced her little sister that did arrive and grew to be the most overprotective and loving older sister imaginable.

But the time came when I knew I needed to tell Molly- to remind her, actually.  I knew she carried it inside her. I knew, with the work I do it was only a matter of time till she found out on her own.

So I told her. She was 4.  I wrote about it on this blog. She took it well at the beginning but four months later a close friends 2 year old suddenly died.

And that triggered her. She understood in a way that hit too close to home. The tantrums, the anger, confusion, sadness. It brought me to my knees. I brought her to therapy, it helped.

A few weeks in Molly asked if she could bring the dolls with her.  The dolls. The dolls.

I said yes, of course.

That is the week she named them, Sunshine and Daisy.

And so it was.

And my little one was drawn to Sunshine, even before Molly told her about their sisters.

That’s right. Molly told her. They talk about it among themselves sometimes. While they color together or in bed at night. In fact, my little one has almost never spoken to me about Sunshine and Daisy, she’ll only speak to Molly.

So, back to show and tell.

In preparing for the big day the teacher sent home some questions about the item the child planned to bring. This is what my daughter filled out: 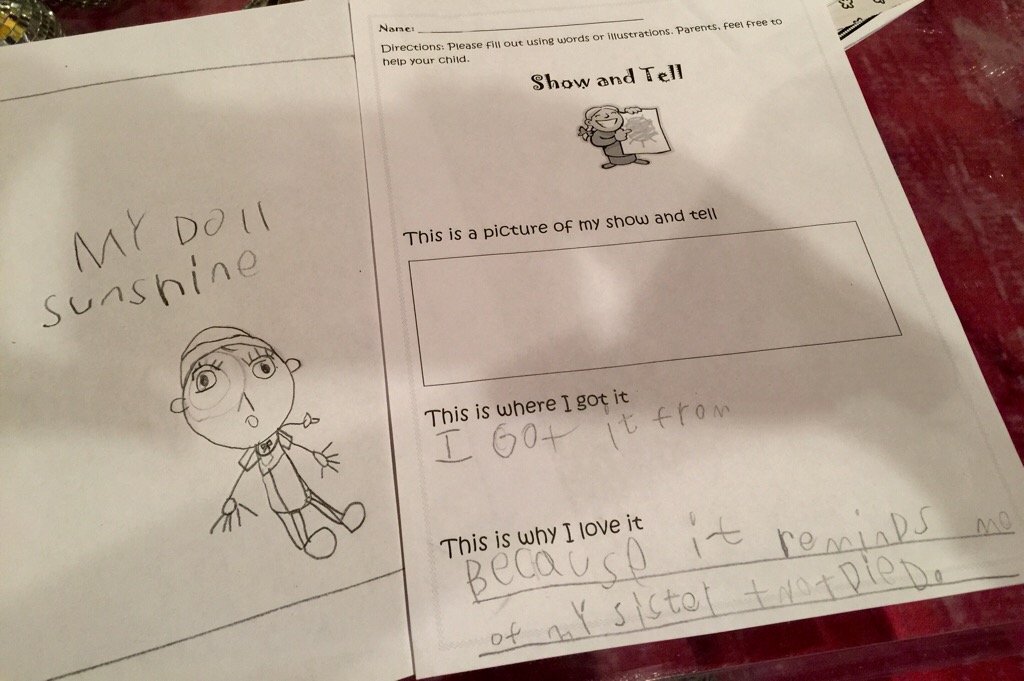 In case you can’t read it the sentence prompts “This is why I love it” and she wrote “because it reminds me of my sister that died.”

Now, I am not going to lie… I did not want her to bring this into school. I asked her a few times if she was sure that she didn’t want to bring another doll. She was adamant. And I certainly didn’t want her to feel ashamed or embarrassed about bringing it in so I said fine.

This morning I walked her into the building and saw her teacher.

Perhaps I should give her a heads up, I thought.

So I told her about the doll and what my daughter wrote about it. She looked a bit horrified. Then I told her it was accurate. I briefly explained our loss, how Molly named the dolls in therapy and that that’s what it was.

The teacher then informed me that someone very close to her had lost twins 15 years ago. “She hasn’t been the same since.” She said.

She explained how she seemed to sort of get trapped in the darkness and never quite made it back.  I told her I’ve known women like that.  I told her I was afraid at one point I’d be like that. I could, from the depths of my grief, feel how easy it could be to slip and fall permanently into the dark. The habits of grief, the perspectives of grief. The colors of the darkness.

I told her I haven’t been the same since either.

I pointed to my pink hair and said “This is how I fight the darkness.” (It was morning drop off- I was barely wearing more than pajamas, let alone any full-on Muchness.)

And I realized, even to this day, even when I so rarely blog, when the talk about grief exhausts me, even when I’ve come to peace with my loss and love my life, I still need to- want to- fight the darkness. It’s everywhere.

I told her I HAD to move- in retrospect I see it now. I could not grow into this me while living in the space of that me. I need to chase the light. I need to share it, and I need to always fight the darkness. We all do in our ways.

Show and tell went ok, I think. I only heard from my daughter who said she shared about her sisters that died but it made her sad and she didn’t want to talk about it.

I’ll email the teacher for an adult perspective on how it went.

For now I feel grateful. Just grateful. For a school that doesn’t freak out about this stuff. For daughters that can share with their hearts open. For a teacher who I could open up to and responded in kindness. For a new niece, born healthy and beautiful just yesterday. For a whole lot of other little things and big things.