I haven’t written too much lately. It’s not that I have nothing to write about, it’s that I feel a little overwhelmed. There is so much I want to do – so many places I want to take The Muchness Movement, and so little time in which to do it. Today is September  3rd. It’s 12:15 in the morning. I’d been thinking about this post for a few days, and planned to post it in September 1st. September. That’s the month. If you check out the little ticker in the left hand corner, It’s getting close. Just 22 days away. 22 days and it will be two years since we said goodbye to Sunshine & Daisy. Two years since I (unknowingly) said goodbye to my old life and started building the one I have now. I still miss them. I’ll always miss them. My arms still ache to hold them. I still wonder what they would have looked like. What they would have smelled like. How it would have felt to have two identical looking babies look up at me, smiling.

I only see them in my mind as babies. I know some babyloss moms are different. They envision what their baby may have looked like as they got older. I don’t know. Maybe I do that too. I look at babies that are close to their age but I don’t imagine them that way. They’d have been premies. They’d have been smaller. There are just too many unknowns for me to make an accurate picture in my mind, so I avoid doing it.

I realized that I started this Muchness project in April. The twins were conceived in April. They lived for almost 24 weeks inside me. And here we are, three weeks away. Once I realized what The Muchness was capable of, I made it my personal goal to grow this project to really huge proportions by September 25th. I regret that I have not been as single-minded and focused as I wanted to be, and now the anniversary is looming and I’m feeling overwhelmed by all I want to do.

So, I’ve decided to take my to-do list ‘public’ and post it on this site. If there is one thing I’ve learned in the last 2 years…. well, then that would be pretty sad because I’ve learned about a million things I never knew (back when I thought I was so smart, ironically) Anyhow, I know that when I put my feelings out there, it helps me move through them. When I share them with others, it helps me to stop swallowing them whole because they can just choke you. So,  I’ve started a list. I’m even having a hard time finishing the list, let alone the things on it. Fabulous.

22 days to make a dent in the list and enlarge the Muchness Movement footprint. Molly and Liat are amazing little girls who will undoubtedly make their mark on this world. I want to pass on to them the inspiration and strength that their sisters taught me. That is Sunshine & Daisy’s gift to our family, and to any other individual or family that is affected by The Muchness. Their bodies may not have lived outside my body but their spirit does. I believe it is my responsibility to make this their legacy. God, that sounds so melodramatic. I almost deleted it. But I didn’t. Because I believe it. (and besides, The Muchy Tova is nothing if not dramatic 😉 )

September 1st, 2009. Our ultrasound tech, Sureka, said the babies were looking really good that day, so against standard protocol, she pulled out the 3-D ultrasound wand and took some pictures for us of our beautiful, healthy, identical looking babies. What a gift those pictures were then. And even more so now. 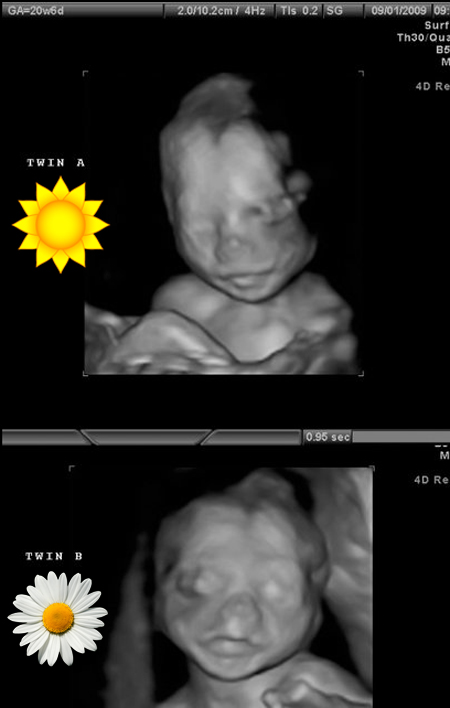 5 Replies to “Where is the Muchness?”