In high school I found a vintage glass candy jar at a thrift shop and I started collecting my spare change in it. That jar (and the vintage disco ball I found at the same shop) traveled with me when I moved out on my own to go to college in Manhattan. It sat on a shelf surrounded by my collection of candy toys and my little terra fighter fish, Fonzi.

After graduation, it came with me to queens where it sat on my bedroom dresser. For a while its contents became the only money I had – I’d fish out $3.25 every morning and walk around the corner to a neighborhood bagel shop. I’d buy a coffee and bagel with a scrambled egg which lasted me all day until I had a pot of spaghetti with ketchup for dinner. I’d eat right from the pot. One less thing to wash.

The jar followed me back to my moms house when I closed my handbag company and could no longer afford my rent. It was one of just a handful of physical possessions I took.

It followed me (still with the disco ball) to the apartment in New Jersey I moved into with Elie after we’d been dating just four months. As we settled in I discovered he too had a pretty significant spare change collection. His was in a gray lock box type thing— not nearly as groovy as my vintage candy jar.

The day we sat and poured his change into my jar was pretty significant. There was no going back. No separating his years of spare change from my own.

That was when I knew.

We continued to drop our spare change in that jar, pulling out quarters for the building’s laundry machines and parking meters.

We got married, got pregnant, bought a house. I had the disco ball professionally installed in the family room with two spotlights on either side, it’s motor and the lights all controlled by a single wall switch- a dream fulfilled- and we continued to drop our change in the candy jar.

While on maternity leave with my oldest daughter Molly, I dug through that jar, removing the pennies, which I used to tile the entire floor of the powder room attached to the family room.

Eventually, the jar filled up completely.

Sitting under Elie’s desk in our home office, too heavy to move, the kids would sit at his feet and pull out handfuls of change to play with and count. We used the coins to teach Molly math. We started filling other jars. Pretzel jugs that sat in the kitchen, piggy banks that rested on the kids dressers, mugs that found their home near the shoe rack in my closet or above the washing machine.

Now, we’re heading into the next chapter of our lives- we’re moving across the country… Simply because we want to. It became very clear that unlike all the moves I’ve made until now, the change jar could not follow me as it had for the last 25 (25!!!!) years.

This weekend, we went through the house, collected all our spare change collections, and drove to the local TD Bank with a penny arcade.

And we nearly broke the damn machine.

Bucket after bucket, handful after handful we put into the automatic counter. They had to replace the collection bags four times. The guy online behind us with a plastic Big Gulp cup half filled with change couldn’t believe what he was seeing. The ongoing clink and clatter was so loud the people in the bank had to yell to hear themselves speak.

And when it was done the machine breathed a sigh of relief and spit out a puney little piece of paper. We brought the paper to the teller and he handed us nearly $1,300 in cash.

The Bucket Of Change -appropriately named by default- that has followed me since high school, fed me, clothed me, taught me and was the catalyst for my “oh-he’s the one” moment, is now going to fly us to our new home in San Diego.

We’re gonna take the now empty vintage candy jar of course. When we get to San Diego I imagine we’ll start filling it again- with spare change and new memories. 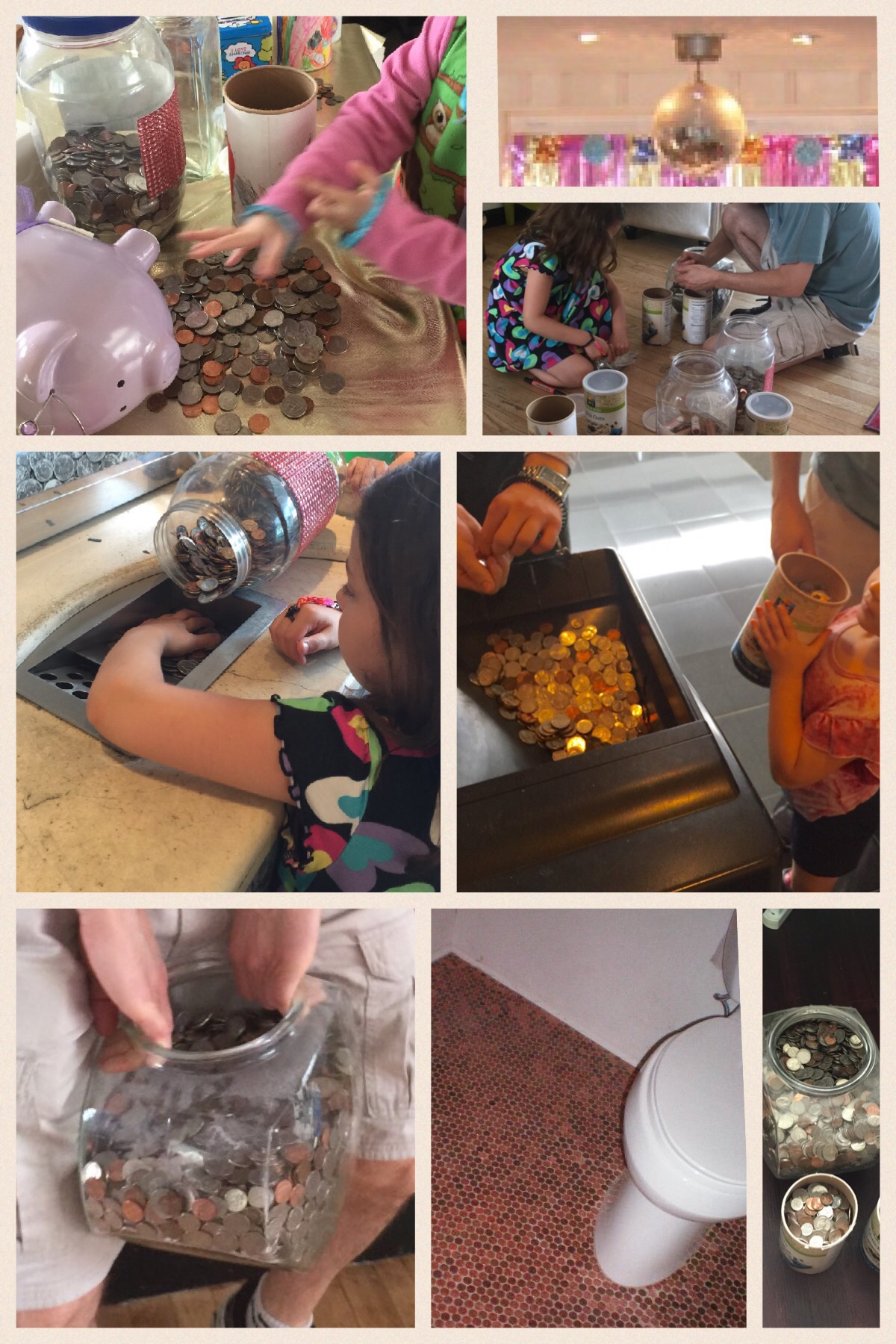